We walked past the Matterhorn and decided to jump in line. In my previous three Disneyland trips this ride has always been closed, so I was looking forward to finally experiencing the classic ride. And, wow, it’s classic for sure 😉

Dot and I got in line and Daddy and baby walked around. The line didn’t move at all and we saw empty bobsleds running the track. Suddenly we moved a ton, and I thought for sure the ride was broken and they were turning people away. Tony came back from investigating and said they’d just reopened it and the surge was the filling of all the empty bobsleds.

Okay! We were excited! Dot especially for another coaster. Not too long later they announced a 10-minute closure for “technical difficulties.” Um, so not what we want to hear before a big roller coaster. Well, “big” being a relative term. We decided to wait it out, as we were so close to the front after a relatively short wait time.

Dot and I eventually got on and as the ride took off I immediately noticed how jerky it was. Not smooth at all and I wished I’d tightened our seat belts up real good. D was a bit spooked, mostly of the dark but doing alright and then… I’m not sure if that is actually the one we saw, but she saw an “abonible” as she calls it and was scared. But more a profession of scared than true terror, if you know what I mean. It’s so funny, because she has a strange relationship with the Abominable Snowman. She’s seen him in the Rudolph film and in Monsters, Inc and, strangely, when M&M was born and my mom took her to Build-a-Bear to pick out a stuffed animal she picked an Abominable that she named “Furry Monster.” She loved it but didn’t let it sleep in her room because of his “scary teeth.” I had no idea there would be an abominable on the Matterhorn, but there was.

When we got off I wasn’t sure she’d want to go again, but I hoped she would. She said no and Tony retreated back to the stroller with M while D and I made our way through the exit. Immediately she breaks into hysterics because she does want to go with Daddy. Oh, the three-year-old (no-nap) drama! We found Daddy and they went back and were let right on. Dot rode with her hands covering her eyes the whole time, but I thought it was sweet she went again with (for?) her Daddy.

The next picture I took while the Ds waited in line for Thunder Mountain. M&M was sleeping in the stroller and I was walking around exploring the area a bit and I turn a corner and…there’s Woody! So I waited in line, childless, to get an autograph. Trying really hard not to feel ridiculous. I’m glad I did because Dot never did see him. Another day, same scenario, Dot and Daddy are waiting in line for “that train roller coaster” and I wander up the bend a bit and there is Woody and Jessie! That time I was walking a babe to sleep though and had neither autograph book nor camera. Bummer.

Any guesses on the girl’s favorite ride? 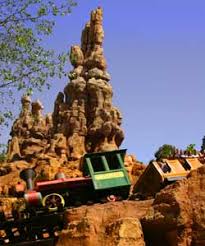 Why yes, THUNDER MOUNTAIN it was. She loved it and we loved going on it with her. The trip would have been worth it for this ride [with her] alone. She went on with Tony and we Baby Swapped and it was my turn. Already she was all about “arms UP” and screaming the entire time, even before the train took off. She is SO my kid. The next day I was texting my dad and he said that when they took me (also at three-and-a-half) I loved Thunder Mountain so much that they had to bribe me, like “we can go again if you go one three other rides first.”

The downside to our off-season timing was that more things were closed for “beautification.” We knew Splash Mountain and the Pooh Ride were closed, but didn’t realized all of Critter Country was shut down as well. When we made our way over to California Adventure we found it in a noticeable state of transition with about 1/3 of the park closed. It will be fun to go back in the future and see the outcome of all the work being done!

We headed back for a second tour of Toontown, but from this point on it was all about the roller coasters. I took Dot on Gadget’s Go Coaster (fun, but kid’s play after her other coaster experiences that day) and she explored Donald’s Boat. ﻿﻿We had meant to head back to the hotel for a break that day but it just hadn’t happened. At this point is was getting to be 5pm and darkening by the minute. Plus, we were starving!

We decided to begin to head back but got stopped by Daisy Duck. Dot did a much better job of meeting her (still needed to be held though) and Daisy was quite taken with little M. We later heard that Daisy is the most rare character to see in the park. If fact, the employee said that is Daisy is out that means “something has gone wrong.” We had caught a glimpse of her early in the day so this sighting made two. Not sure about that little “fact” but we never saw her again.

As we exited the park was came upon Mickey and Mickey together in an alcove off Main Street. We met them, got pictures, and autographs. We also saw Goofy, though Dot decided to stay in the stroller and, last, Pluto.

On the way back we stopped at California Pizza Kitchen for take-out. Tony and Dot headed back to the hotel while I waited with formally sleeping but currently screaming (in her sling) M. We scarfed food and passed out before 9pm.

This entry was posted in Tips, Tricks, and Experiences, Uncategorized and tagged Disneyland. Bookmark the permalink.

2 Responses to Disneyland: Part IV – Day One wrap up.