What Comes In Must Go Out: Solids and Cloth Diapering.

I’ve decided to spare you the visual representation of this sentiment. You can thank me profusely in the comment section 😉

My frozen milk stash in its former glory--and it grew from there!

M&M has entered the next phase of babyhood and is now consuming solid foods! We started her a few weeks earlier than we started her sister (Dot first had rice cereal a few days shy of six months). This is partly due to the intense interest M shows in food and the eagerness of both Daddy and Dotter.

Mostly, it’s due to my dwindling freezer supply and inability to pump anything close to what the growing girl consumes when I’m gone. Since lately M has needed a bottle three mornings a week, one evening, and sporadic nights while I sleep my [lack of] a supply has been stressing me out. Some solid food is a great Daddy-friendly option to buy mama some time.

Thus far she’s tried yams, strawberries, carrots and avocado. Next up is bananas.

If it wasn’t for a waning breast milk supply, I think I’d have waited until six months to give M food. And this is for one reason. Solid food poops. Now, with disposables the ick factor just ups a little. But with cloth it’s a whole new ballgame. One I’ve been dreading. Questioning. And avoiding thinking about.

We are now three months into exclusive cloth diapering. And it’s basically been a breeze. I love it. It’s easy. It saves store trips and oops-I-forgot headaches. Poop blow-outs are unheard of and zero diaper rash to boot. The “extra” laundry is minimal; a load every other day that I barely notice. I can’t express how reassuring it is to realize I’m almost “out” of diapers and know that I can start a load and have 2-3 days worth in a few hours. Free.

The week before last M had an unusual expanse of days without a bowel movement. We’re talking three or so days. Then she got the flu and the diarrhea associated with it. Oh man she had some stank-ass poos. I figured her lack of poos was probably due to the sickness. 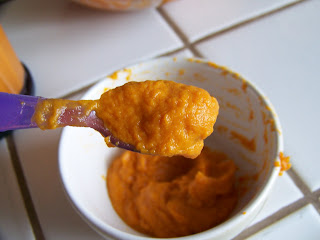 I remember she pooed one morning a couple days after she was better. Then nothing. A day or two after that we introduced yams to her system. And I’ve got my own no-grain diet change going on (though at that point it’s been two weeks).

About four days without a poo and we began to worry. I went back and forth between thinking it was my fault (or at least believing her pediatrician would say so) and thinking it was completely normal, reading that breastfed babies can go a week or two without pooping and introducing solids is notorious for causing constipation.

Four days passed, then five, then six. Little M showed no real signs of distress, had plenty of pee diaps, and her stomach was soft. So we tried not to worry…all the while waiting anxiously. Friday morning, a week later (give or take a day or so, I’m not certain which morning her last exclusively breastfed poop was), she pooed. I had hoped it’d take a while before her “solids” came through and affected my life. No such luck.

It was a full diaper of peanut butter-like poo. And I was unprepared. I set it in the laundry room. I went in 4-5 times throughout the day, looked at the diaper of nast, and left. I had no sprayer yet! I hadn’t put a liner down! And I did not want to dunk it. In case you aren’t aware breastfed baby poop is water soluble. This means I can just toss them in the washer. But solid food poo needs to be dealt with.

Finally, in the late afternoon I used toilet paper to scrape the pasty shit (literally) into the toilet. And proceeded to clog it. Go me. Then I washed the diaper and it was as good as new. We survived our first solid diaper poop!

And now I need to get prepared. Because there’s more where that came from.

3 Responses to What Comes In Must Go Out: Solids and Cloth Diapering.